Anyone but me even remember that Barry Manilow song? Eeeek! My secret is out - I'm the only Barry Manilow fan who openly admits to it :-D Although I did see him on the telly last week, for some "what would Brian Boitano do?" ice show, and he looked very . . . um . . . young . . . if you get my drift. Just not an attractive look . . . for anyone. 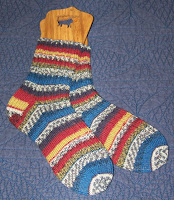 Anyway - here are the final socks of 2007. In my first year of knitting socks I knit 10 pairs. Wow! These were made for one of the "church ladies" in my prayer shawl knitting group. I modified the basic sock pattern I have been using - this time ribbing the leg for maximum stretch and deepening the gusset to accommodate her feet and ankles, which have a tendency to swell. She picked this yarn from my stash.
One more day of my great long weekend! I have watched movies, knit stuff, spun stuff and just generally had a great time. I watched Notes on a Scandal, which is very good. I also watched a Bollywood film called Salaam-E-Ishq, and it was really really good - sort of an Indian Love Actually, except that it was three hours long. :-D I have no idea how I ended up liking Bollywood films, but I do. I think it's the music and the dancing - maybe the hottie guys? Whatever :-D anyway, if you want to try out a Bollywood film, I would recommend Salaam-E-Ishq. I also watched Kal Ho Naa Ho this weekend and just sobbed throughout the entire last 45 minutes. It was really good, too. 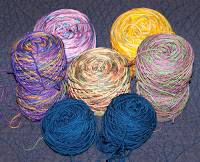 Next up - as mentioned, I have joined a sock KAL - here is the sock yarn that got wound the other morning. Clockwise from the yellow: JWray sock yarn; Lorna's Laces, Shibui Knits, Claudia Hand Painted, and Yarn Love. In the middle is Seacoast Handpainted Panda. Some of the purples will likely go to an auction for the African Violet Society of America - some will be for me, and we'll see about the rest - I have one cousin who LOVES that I knit her some socks :-)

Happy New Year!
p.s. I have no idea why Blogger things that spaces between paragraphs are no longer a good thing . . . Sorry.
Labels: Finished Objects

Priscilla said…
Hello! I love reading your blog...you are a true inspiration to me. You have the same zest for life that Maureen did! I too love to knit. I also quilt.I bought a spinning wheel years ago and took a few lessons. I have a tape and 2 large spools of wool(1 white and 1 black).Someday I want to spin my own yarn. I also need to drop 40/50 lbs. I have a tredmill-my knees are ready for replacements but I don't health insurance so I do alot of walking.My BeeshPoo needs it twice a day:) I was a jogger for years!It kept my weight down and I really miss it. I am a Paralegal but was laid off a year ago and God's plans were not my plans!I love reading your blog as it inspires me in so many ways!! God Bless You!
January 1, 2012 at 10:04 AM 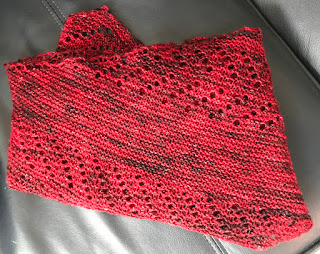 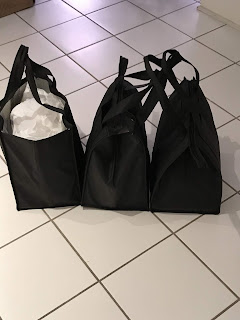 A :-)
Somewhere in Chicagoland, United States
I'm gloriously unfinished - every day is an adventure on my journey of health and wellness. There is knitting on the way, but most important is this: Life is short, so dance like no one's watching. I'm glad you stopped by and hope you'll keep coming back :-)